.. when you wake up tired and need a Monday to get some rest

– when you’ve eaten and eaten and all your favourite foods too.

– when you’ve watched two movies( that’s a lot for the likes of me:) )

– when you’ve lugged a sack of books home, can’t wait to start reading them.

– when you know that the weekend was just a prequel, we are just days away from a three week holiday!

It has to be the best weekend, when even the food you make turns out unexpectedly delicious:)

PS: I haven’t bee replying to comments or blog hopping much, its been a busy week. Will get down to it soon, hopefully.

Its been a while since I wrote about our weekends. Not surprising, actually, because most of our weekends don’t seem to be something to write home about, these days!

Last year, I enrolled Poohi in a swimming class, and that I think partially contributed  to the demise of the weekend posts. Just the other day, husband and I were horrified to find out that we did not even make one day trip to York last year. York is our neighbouring, cute, historical town. We love going there, walking around, walking by the river.. It is even better in spring and summer, but that never stopped us from going there in Autumn and Winter. This last year, every saturday goes off in finishing off Poohi’s work, rushing to the swimming lesson, and once we are back, we end up wasting time over lunch, and before you know it, the day is over!

Last Saturday, we decided to go to York. No wasting time having lunch and stuff, lets just get going and grab a bite outside- was the plan. It was freezing, but sunny – the mere feel of sun, makes the whole world look cheerful and happy! And the whole world also looks like it is out to enjoy the day 🙂 but in the opposite direction. Look!

Normally, we drive to York and then spend the same amount time trying to find a parking space. This time we decided to use the Park and Ride facility. We always thought of trying it out but never did. So we parked the car and got onto the bus to take us to the city centre.

Public Transport is so much more fun, isn’t it? At least it is for me 🙂 I love getting into buses and pretending that we are on a real holiday 🙂

Now, while this trip was all suddenly decided, we did have a plan. We have been to the York Minster loads of times, we had never made the trip up the tower. Most of the time, we end up parking somewhere far away, walk through all the little lanes, and are exhausted by the time we reach the Minster. This time, we had a one point agenda. Climb up the Tower. So as soon as we reached, we rushed to buy the tickets, only to be told that our daughter needed to be 8 before she could be allowed up there… Now, having no option to leave her behind, we decided to just take pictures and walk around all those quaint little lanes, just as we do every time that we are in York.

The York Minster from all sorts of angles( to bore you all to death :)) 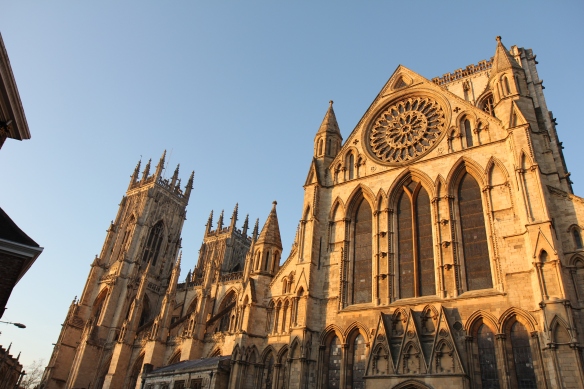 And some more.. doesn’t it look majestic?

Since climbing the tower did not happen, we decided to do the other thing we always planned and never did. Walking on the City Walls.  Apparently York has more city walls intact than any other English city. So off we went. Fun time we had, and a history lesson as well, because Poohi wanted to know everything about why York has city walls.. Going through the pictures, I realized that I had just one picture without any of us – that’s what happens when Husband has the camera- he does not remember to take blog pics 🙂

Something cute(that we found cute), we found while on that wall..

The sunset far away….. 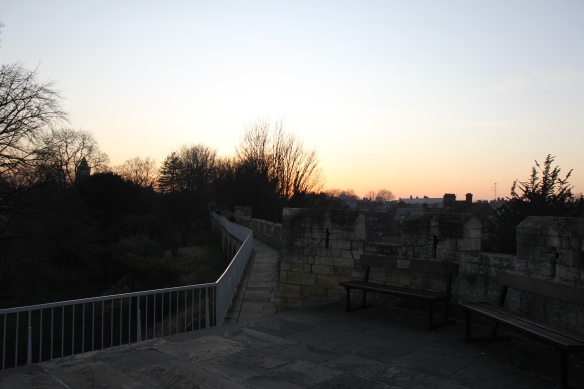 Finally we came to the end – of one part of the walls, anyway. And off we went through the little lanes, dotted with cute shops.. And after all the walking, we went into a cute little cafe, and had a full Yorkshire Tea, complete with scones with clotted cream and all. Tummy and soul satisfied, we walked back to the bus stop to take us to where our car was parked. It was -2 deg, but we had the greatest time!

On Sunday, because all the walking was not enough for us, we decided to go to a nearby park, and go on a nature walk. It was a cold and frosty morning – one of the first really cold days this winter. Everything looked like they had been dusted by a fine sprinkling of icing sugar. Just the perfect weather for a walk beside the lake.

Turns out, we were not the only folks out to enjoy the day..

After all the walking, we balanced it out nicely with bread rolls, bread pakodas, mix veggie pakodas and gulab jamuns – Can’t take the risk of being too healthy, can we?

Does anything sound sweeter to one’s ear than the delighted giggles of a child, thoroughly enjoying herself ?

After, Poohi not getting to see any animals, last week, we wanted to ensure that she got to have some fun this weekend. And it was not very difficult to achieve either.. She had been invited to a birthday party, and ended up having a ball of a time too! And that was just the start of the weekend.

It was in a soft play area where the children went crazy! Climbing up obstacles, and zooming down giant slides to end up in the ball pool! It was fun to watch her collapse in giggles as she hits the balls 🙂 It took me back to the time in London, where we used to go to these soft play places, very regularly.There was one, very close to where we lived and there the parents were supposed to go with the child – on to the play area. So to be honest, it was as much fun for me as it was for her.

Those days, husband used to be working away from home – 5 days a week 😦 , so we used to do a lot of mum-daughter fun stuff. The soft play area was on of our favourites! We used to climb right to the top and zoom down the huge slides, ending up in huge ball pools  – huge enough even for mums to get submerged 🙂 It used to be amazing exercise too – for me 🙂 Made up for all the junk that I used to eat 🙂

That was the time when, I ‘fell in friendship’ with a dear, dear, dear friend. She was my husband’s ex-colleagues wife. Funnily enough, we had never met before we accidently ran into them at a restaurant. We started talking on the phone and hit off instantly!  Both our husbands had been very busy travelling and we went on our annual India vacation and we never met again for the next three months. We did keep in touch on the phone all the time though.. Finally, we ended up meeting at a play group near her house and from that day on – I think we met every single day  – barring the weekends. She had 2 daughters, a 5 year old and a 1.5 year old- the sweetest little children! . Her younger daughter and mine hit off too 🙂 Both their names were similar sounding and both of them referred to each other with the same name and funnily they, even looked similar. We used to be asked by people of the road if they were cousins 🙂

Those days, were probably one of the best times, of my life.. We used to be inseparable.. We used to meet at the play group every day – and then walk around the town aimlessly – talking away, go to the park, and let the kids run around having fun.. and yet feeling as if time was not enough.. there was so much more to share and so little time. It was a truly magical time.. We used to share what we cooked. What she cooked and I baked, to be honest :), share our thoughts on everything possible.. gossip , have serious discussions… watch our little girls have fun while we, big girls had the time of our lives too 🙂

The amount of fun all of us had, was amazing.. What absolutely took the cake, that my friend’s elder daughter and Poohi got along very, very well too – from the moment they met! They even had a sleep over at our place and my daughter could not stop talking about ‘chechi'(elder sister) for ages after that..

What brought on, all this reminiscing? Well, it’s been a year since I saw her last. They returned to India last year, this time, and to be honest, it broke my heart.. Everything felt so empty.. Daughter used to look for her friend, in vain, every time, she went to the play groups, to the library or the parks…We are still in touch and we can still talk away for ages on gtalk or on the phone.. and it is almost as if she has never been away.. But it is amazing how much we still miss each other..  Just makes me wish, how wonderful it would have been, if our friends did not have to move away, or if we could all live nearby.. how wonderful that would have been..

Weekend Update : I have to say that this weekend, while Poohi had a wonderful, wonderful time, I got the bestest compliment from a little 7 yr old girl:) She told me that my daughter and I look like a ‘pair of twins’ :), if only I had been a little shorter 🙂 For an almost 33 yr old to be told that she looks ‘just like’ a 3 yr old is huge 🙂 Coming from the mouth of a babe – I am going to consider it totally true 🙂 And to make it even better- I even drove the Audi !!!! Yay!!!! Even the fact that it was just around our estate did not detract from my excitement!!! Like, my daughter says, ‘I’m so excited and happy’!!!!