A half term break, not a blog break. So all you guys who heaved a sigh of relief, that I won’t be bombarding you with posts, well , not so quickly 🙂

It’s daughter’s half term break, and  it’s already driving me crazy 🙂 We are even busier than we are when there is school. We have play dates planned, day outs, and other exciting plans(for her). And you know what is the worst part, I am reading the ‘The Girl with the Dragon Tattoo’ ,which is riveting and daughter is certainly not happy to let me read!

I envy all those parents who use these breaks to get lie-ins and extra time to relax. For me, it is rounds of cleaning up and tidying up. Don’t believe me? Look at my carpet 😦 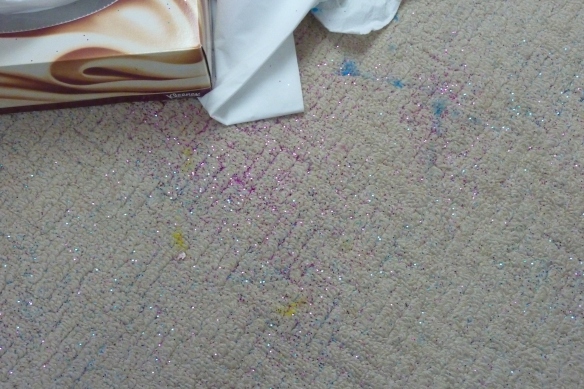 And did I tell you that the weather has been going crazy? Just when we thought that spring  was round the corner, we got this! Snow, all over again. That should teach me to not rejoice so quickly!

You know, I keep complaining about my dying plants. Now I have a plant growing, and I have no idea what it is. I had planted some tulips and daffodils, but this looks different. Any idea what it could be? Is it some variety of tulips?

So what have you guys been up to? Who else is a fellow term break mum here? And how do you plan to get through the week?

Most of you guys know how much I love the sun these days. Every time I see a ‘Sir Sun’ post at PNA’s, I go green with envy.

Getting to see sunlight once in a week(if we are lucky), sure makes one understand how precious a commodity it is! I think that is behind the British travelling so much and exploring(and colonizing) other countries. They must have been ready to do anything to get away from the dreary weather here. Husband had once read a book about how the economic success of the Western countries have a lot to do with factors like the weather. I have to get my hands on that book – sometime.

Getting back to how the weather makes such a lot of difference to my life. Remember how I had just two of my precious plants left after the big freeze killed the rest? Well, look how my rose plant is thriving in the sunlight!

If someone could bottle up sunshine, that would be an instant bestseller, wouldn’t it?

My begonia basking in the sun 🙂 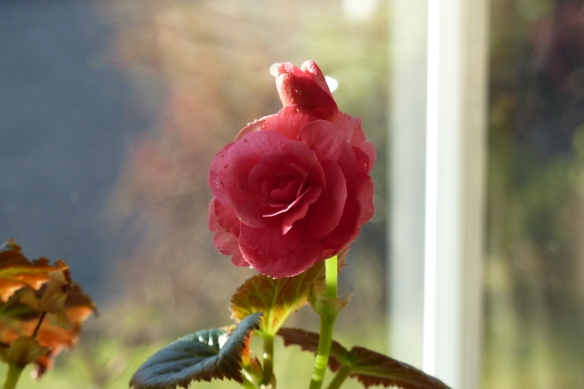 And we go berserk. We rush off to be outdoors, so what if it is still biting cold. We go for long walks in the sun, so what if we are all wrapped up, top to toe. Playgrounds are full of children, who can’t believe their luck! And some people do this.

Yet others try and capture sunlight, in a frame, if not a bottle.

Today is one such day. I have sunlight streaming into the house from every window. Every person I met on my walk today had something to say about the weather!

One of the things that make me happy is sunlight.

The sight of sunlight streaming in through my living room windows, or casting a beautiful golden hue on the beds upstairs, my hungry-for-sunlight flowers soaking in the luxury.. It is amazing, how much power the sunlight has. I would have never said this a few years ago, but now, I truly appreciate the beauty and the need of sunlight. The mere sight of sunlight streaming in lifts up my spirits, makes me perky and bright, has daughter running outdoors to play, so what if it still is chilly.

In the big freeze in December, all my plants in my conservatory died. And broke my heart. This was my first time in a house with a conservatory. Normally all my potted plants are indoors – this time, I did not realize that conservatory does not really count as indoors. I just have 2 plants left, and I pour all my love and attention to keeping them alive. Today, the gorgeous sunlight had me opening every blind and curtain possible, rotating my rose bush until it got sunlight from every quarter. Every new leaf that sprouts has my heart erupting with joy. I think I monitor my plants almost as diligently as I monitored my daughter’s activities when she was younger.

This morning was even more magical. We had a light layer of frost, which had side-walks glistening like millions of diamonds, when the gentle sunlight fell on them! Oh so gorgeous! I only wish I had a camera handy to capture it!

Oh spring, do come soon! How I long for days of uninterrupted sunshine, daffodils,splashes of colour, days spent outdoors, and not having to worry whether my plants are getting their daily dose of sunshine!

There is a reason why the favourite topic of the British is the weather.

The last few days, we have been gloating over the rest of our friends on this island. The whole country seems to be under 10 inches of snow, while we have a beautiful dusting of Christmas Card snow. Yes, it is cold, and walking outside is as good as asking for a broken leg, but still! At least we are not snowed in. You see, it is normally the other way around. We are the ones with the snow, while those in swanky places like London, call us telling us how much they wished they could have that kind of snow.  Well, you asked for it.

We may not have the snow, but we have all the cold and more. The temperatures touching -11 at night and the max daytime temperature has been -4. I have never lived in such cold climes before. The other day, I was convinced that I had lost all my fingers – despite being well covered in warm gloves. I found I was not the only one covering her mouth and nose, in a desperate effort to prevent my nose from freezing and falling off my face.

Yesterday, I mustered courage, after a couple of days, to enter my conservatory. Our conservatory has central heating – but it is way too cold, even with the heating. So we had just switched of the heating there. The only time I would enter it was to water my precious plants. Yesterday, I noticed that there was a layer of ice, in the saucers that I keep under my potted plants, to catch any water that might leak of the pot. Ice! That’s when I realized that my plants were frozen in place 😦 I rescued the few that looked might have the potential to be rescued.  Just days ago, they were fine and still blooming. This morning, I found them all lank and limp. I can’t tell you how heart-broken I am. Do any of you know what I could do to save my petunias and geraniums? I am almost too afraid to google, I doubt if I could do anything to rescue them.

This morning, I found my watering can, which I had abandoned, still full of water, in the conservatory when I had seen the state of my plants, was frozen. Daughter had a wonderful time touching the ice and shrieking  – anything to keep her entertained during school holidays which does not involve any outdoor activity.

All these are still alright, but the travel chaos is the worst. People stranded in airports, holidays canceled – heart-breaking, isn’t it Our friends had their holiday planned 6 months earlier, and it almost got canceled. Thankfully, they have managed to board the flight.

You know what is the worst thing to happen? High Street shops are having massive sales to lure people into the shops, and with the weather being the way it is, we just can’t go 😦 Life’s little ironies…

Is what I am getting asked by friends – real and virtual.  So I thought, I would tell you the story in pictures.

We did a lot of packing and unpacking. The picture below shows the kind of chaos that existed t home those days. Unpacking thankfully, was much quicker.  The only thing that took time was the broadband setup. Why it should take 4 weeks is beyond me, though.

Some one has discovered the joys of writing. And she could spend hours ‘writing’. That really helped during the packing/unpacking madness.

And then, my latest craze, gardening. I do have a helper, as you can see.The little yellow flowers are actually weeds but look so pretty that I have no heart to pull them out. We had a landscaped garden in our previous house so there was very little we could do, here it is a blank canvas, we are having a ball.  We(Poohi and I)  check on all our plants on an hourly basis driving husband to distraction.

We have been having strings of birthday parties and all weekends until May 2nd are currently booked by birthday parties to attend. At this rate, I will become an expert gift wrapper, if not anything else , not to mention, all the weight I have put on, with all the cakes and yummy food that I have been polishing off 😉  Toys R Us must be mighty pleased. We have been spending a lot of time( and money) there. 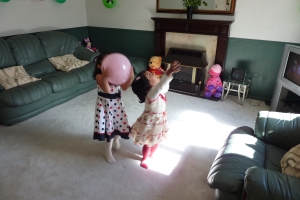 And finally, I have learnt that even without the internet, I can find equally effective ways of wasting time 😉

Everything had not been great though. One of our close friends passed away after a massive cardiac arrest leaving behind a wife and a 4.5 year old son. It was a huge, huge shock to all of us and I think reminded us of how transient life is. How everything could change in a second.

In other general news, volcanic ash has played havoc with a lot of friends, we have friends stuck in India, in the US and Europe, thanks to it. Never had I thought that a volcano could have such far-reaching effect. It has even managed to over-shadow the general elections here.

Amidst all this, the Tharoor/Modi drama provided several entertaining days with me checking the news, the first thing everyday.  What do you think of it? Ekta Kapoor should stop making saas-bahu soaps. Sports/politics based soaps have so much more scope/masala.

So that’s about it, from my end? How have all of you been?

PS: I haven’t been blog hopping, will start in a few days time – hopefully.