Remember yesterday’s post about my baking disaster? Well, turns out, it was not a disaster after all.

My cinnamon rolls don’t look great – but they do taste quite all right. At least daugher liked it. I would have loved it to be a little softer and fluffy. I do think that it has to do with the fact that the recipe used water and oil, instead of milk and butter – me and my crazy ideas of healthy eating. As if there is anything healthy about eating cinnamon rolls at all 🙂 But then, that’s me.

So here are the fruits of my efforts. After Bikram’s comment about my baking getting affected because I did not publish pictures, I did not want to take a chance 🙂 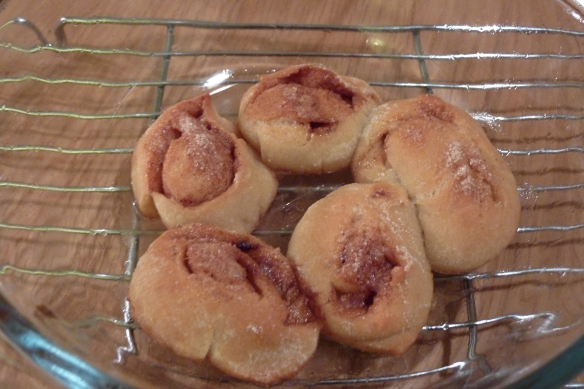 This was the first experimental batch.

And then the next, when I gained confidence.. 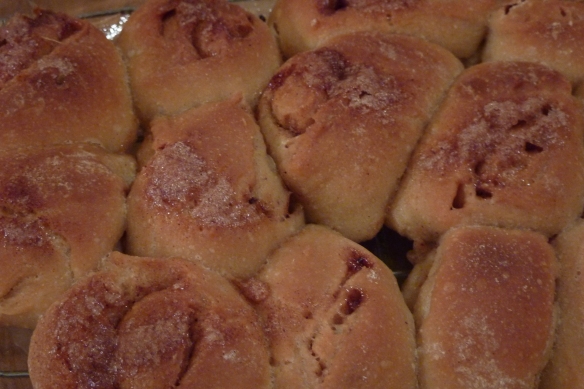 I had ambitiously, planned on making mini cinnamon rolls. Had I thought of the effort involved in shaping little rolls? Apparently not. So finally, I dumped the left over dough into a loaf pan, and this is how is turned out.

I cut it this morning, fingers crossed, hoping against hope that it would be alright, and here’ s how it looked. Cinnamon bread anybody? 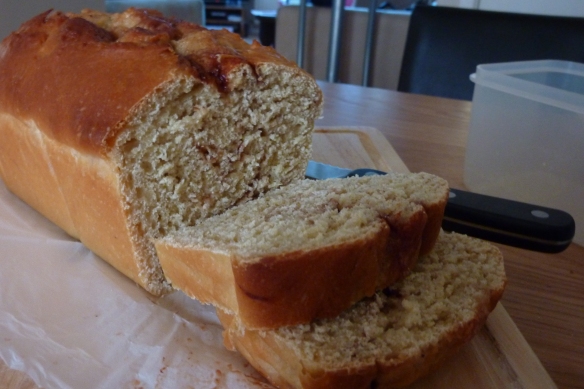 And it tasted yum, toasted! After imagining that all that effort was down the drain, I can’t tell you how glad I am that it worked! I still have no idea why it did not double in size, but it rose nicely in the oven.. Next time, I think I am going to experiment with another recipe, and will test the yeast, and the water before starting it. And yes, will use a much smaller quantity as well!

I am more or less used to kitchen disasters. My cooking does not always give me the perfect result. Who am I kidding, I am happy if what ever I make turns out palatable.

But when it comes to baking, I do get better results. Today, I turned murder 😦 I killed the yeast, apparently. You see, I had this ambitious plan of making cinnamon rolls. It all started when I saw this huge box of cinnamon rolls in Costco. I had to try it out. After hours spent on researching the simplest, difficult-to-mess-up recipe, I zeroed in one. Everything seemed to look fine, until I left the dough to rise. 20 mins and no sign of it rising – at all.

Research tells me that I might have ‘killed’ the yeast with the warm water. I had planned on checking the temp before I poured it in, but, I was in to much of a hurry 😦

It is now one hour, and the dough seems very happy to sit where I left it 😦 No rising, or shining or anything. Do any of you know how to salvage cinnamon rolls which did not rise?