In other words – we might just have to go back to the UK.

Returning back was something, I was confident, we would not end up doing.

Just goes to show how unpredictable life is, and even the best laid plans are not enough – sometimes. We might need to go back to the UK. We might have to return, not for the usual reasons, but because we can’t find a job here!

Eight years in the UK, we refused to put down roots there. Mainly because India always felt like home, and there was nothing we looked forward to more than coming back to Bangalore and living the dream we dreamed. Everything was as per plan, when we moved back in July. Or rather, until Daughter and I moved back – husband was still there for a while, until he got a job in Bangalore. How difficult would it be? Not too difficult, is what I had assumed, husband was far more realistic, even then. But clearly, I assumed wrong. Apparently, most companies just want him to go back abroad on projects. That doesn’t exactly bode well for our, ‘End of nomadic existence’ plan, does it? If we have to be abroad, we would stick to his current job, and stay in one place – UK, rather than be shunted back and forth on projects while being an India employee.

So right now, we are wondering if we took the decision too quickly, if we should have waited till husband got a job before relocating. At that time, this seemed the best thing to do, to come here at the start of the academic year, so that daughter would not have to miss much, so that she could settle in easier. And it worked too – to that extent. Daughter is comfortable, well settled in school but missing her Daddy terribly. She just cannot understand why he can’t get a job here, or why he can’t just come here and find a job.. It’s taking a toll on all of us but hopefully, we will be able to look back at this phase and smile, in a few years time.

Hoping for the best, here we are gearing up for the worst – having to pack up and head back. After a year apart – we plan to give it a year – until the end of this academic year, and lots of money(and effort) spent on the apartment(and other things), we might just have to head back. The mere thought of that make my heart sink. While it would be wonderful to be back with husband, I only wish it were him joining us, rather than the other way around. The main reason we decided to move back – parents, would still be a reason which makes it tough for me to go back. It feels really bad to be so far away, at a time when they might need us… I so wish we were living some place closer to home.

On the positive side -I do believe that daughter would have it better there – in many ways, education, opportunities. And most importantly, safety. Every time I read the newspaper, it scares me. I know, its silly to worry like this,but one can’t help worry. As I have mentioned earlier, I had/have my doubts if India is the best place for daughter, but I was still hopeful that we would be fine. Every country comes with own set of problems, but being in India had so many things we were looking forward to. Being close to family, the fun, that feeling of belonging, and to be finally able to set down roots. For daughter, it is those simple things like being able to play outside everyday. Not having to worry about rain spoiling her playtime. But after the first few months of soaking in the new place, the new atmosphere, now, she has started missing her old school, and friends and also comparing them. Although she hasn’t been very upset, she does wonder why they don’t do some things in the school here, like experiments. But she’s alright, and I suspect she will be perfectly at peace here, once husband gets to join us. Right now, I think the situation has started to unsettle her, just a bit.

Being in a situation like this is annoying, and frustrating, to say the least, the uncertainty, killing. ‘Suspended equilibrium’, sort of situation. No idea which way we go. I’ve stopped getting work done on the flat. We had been looking forward to so many things, not knowing that what we would get is uncertainty and confusion. Right now, I would settle for some definite plans – either way, it would just be good to know which way.

Taking one day at a time, doing just what needs doing, at the moment, keeping our fingers crossed, and hoping that whatever be the outcome, we have the strength to face it, and make the most of it. And if we do go back, one thing is for sure, we would not be doing any relocation, unless all of us move together – lessons learnt, eh?

Will someone please tell me what sense does it make …. 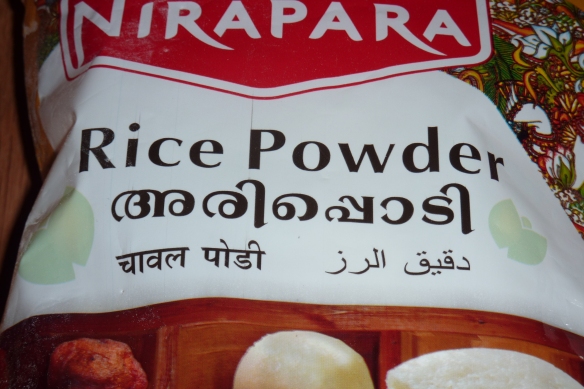 …to write ‘Chawal Podi’ in Hindi? And I just realized that I can’t recall the word for powder in Hindi!