My first book by this author. I picked it up based on recommendations on Goodreads. Now will probably be a good time to talk about how much I have come to love Goodreads. Especially the recommendation section. I’ve come across interesting books, and new authors. I think I log on to goodreads more than I do on to Facebook, and that is probably a good thing too. 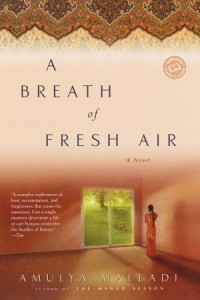 On the night of December 3, 1984, Anjali waits for her Army officer husband to pick her up at Bhopal Railway Station. The delay in his picking her up changes her life forever, when the catastrophic gas leak poisons the city. She manages to survive but her marriage does not. That night in the poisonous city, changed her life in more ways than one, and as she later came to realize, in ways that would affect her lifelong.

Years later, remarried to Sandeep, and mother to Amar, a young boy who is severely affected by the ill-effects of the gas his mother inhaled, life is tough, but peaceful and she finds happiness with what she has. Until the day, Prakash, her ex-husband re-enters her life. Prakash, the husband who is the reason her son is so very ill, Prakash who married her for all the wrong reasons, does that Prakash still have a place in her heart?

Narrated by 4 charachters, it is a beautifully told story. Emotions, insecurities, expectations and even our cultural baggage which moderates the way people think and behave is brought out really well. A poignant tale, beautifully told. The title is especially relevant too- through out the story, even at the very end.

I really liked Anjali’s character who after her initial conformation to tradition, and expectations, decided to chart her own way, despite the resistance from her own family. Fighting the odds, she lives her life, in the best way she can, without the bitterness that might have come with the trials she faced. Her husband Sandeep is another character you start feeling for. A book that had me crying.

I would heavily recommend this book, and would be looking out for her other books.

23 thoughts on “A Breath of Fresh Air by Amulya Malladi”