.. in the form of snow flakes…

We finally had snow! Daughter couldn’t contain her happiness, ‘Winter is finally here! All my dreams have come true!’. *rolls eyes* I had no idea that this what she dreamed about 🙂

But you can’t really blame her, though.. I stepped out, to take out the garbage, and ended up standing in the snow for a few minutes, my face tilted up, soaking in the wonderful feeling of snow flakes falling on my cheeks… I think my neighbour(who was busy scraping snow off his car) on the opposite side might have just found me a bit crazy 🙂

We went walking for the first time, in the middle of the night. And it felt surreal. Of course, the fact that we were the only people on the road, did not help 🙂

Can’t have enough of this tree…

Love the way the whole place looks magical when it snows! 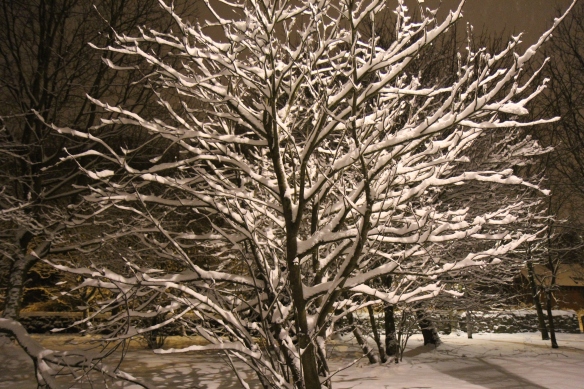 Fruits for the picking…

Sunday was another snow-centric day. We had the great plan of walking in the snow to a friend’s place(we had to drop off something). It was just a mile away, but yes, we did have a bit of an adventure. Daughter pretended that her legs were stuck in the snow, and we had to pretend that it was funny 🙂

The snow had already started to thaw, and the roads were all full of water. I had the experience of being splashed in the face, by a car racing by!! Ugh! The thought of it makes me go ‘Yuck’! But what is an adventure without any fun of this sort, eh? We weren’t the only people on the streets, but one Indian family passing by in their car, stared at us as if we were crazy 😦 I thought I had imagined it, but husband saw it too – it was not just me 🙂

It took us around 30 mins one way – thanks to daughter’s antics, husband’s photography, and me getting splashed!

But it was a walk which I would probably never forget. And as we got back, the snow was already melting off..

I don’t know why, but that made me really sad.. As if the magic was wearing off..

Although, I have to say, from a practical point of view, this is what I would term ‘sensible snow’. Happened on a Saturday, Sunday the temperatures were high enough to get the snow to thaw, and today, on Monday, it is almost BAU. No school cancellations or traffic disruptions.. Or the icy roads that come right after snow..so far.. Hopefully, I haven’t spoken too soon 🙂

33 thoughts on “When dreams come true…”