Does anything sound sweeter to one’s ear than the delighted giggles of a child, thoroughly enjoying herself ?

After, Poohi not getting to see any animals, last week, we wanted to ensure that she got to have some fun this weekend. And it was not very difficult to achieve either.. She had been invited to a birthday party, and ended up having a ball of a time too! And that was just the start of the weekend.

It was in a soft play area where the children went crazy! Climbing up obstacles, and zooming down giant slides to end up in the ball pool! It was fun to watch her collapse in giggles as she hits the balls 🙂 It took me back to the time in London, where we used to go to these soft play places, very regularly.There was one, very close to where we lived and there the parents were supposed to go with the child – on to the play area. So to be honest, it was as much fun for me as it was for her.

Those days, husband used to be working away from home – 5 days a week 😦 , so we used to do a lot of mum-daughter fun stuff. The soft play area was on of our favourites! We used to climb right to the top and zoom down the huge slides, ending up in huge ball pools  – huge enough even for mums to get submerged 🙂 It used to be amazing exercise too – for me 🙂 Made up for all the junk that I used to eat 🙂

That was the time when, I ‘fell in friendship’ with a dear, dear, dear friend. She was my husband’s ex-colleagues wife. Funnily enough, we had never met before we accidently ran into them at a restaurant. We started talking on the phone and hit off instantly!  Both our husbands had been very busy travelling and we went on our annual India vacation and we never met again for the next three months. We did keep in touch on the phone all the time though.. Finally, we ended up meeting at a play group near her house and from that day on – I think we met every single day  – barring the weekends. She had 2 daughters, a 5 year old and a 1.5 year old- the sweetest little children! . Her younger daughter and mine hit off too 🙂 Both their names were similar sounding and both of them referred to each other with the same name and funnily they, even looked similar. We used to be asked by people of the road if they were cousins 🙂

Those days, were probably one of the best times, of my life.. We used to be inseparable.. We used to meet at the play group every day – and then walk around the town aimlessly – talking away, go to the park, and let the kids run around having fun.. and yet feeling as if time was not enough.. there was so much more to share and so little time. It was a truly magical time.. We used to share what we cooked. What she cooked and I baked, to be honest :), share our thoughts on everything possible.. gossip , have serious discussions… watch our little girls have fun while we, big girls had the time of our lives too 🙂 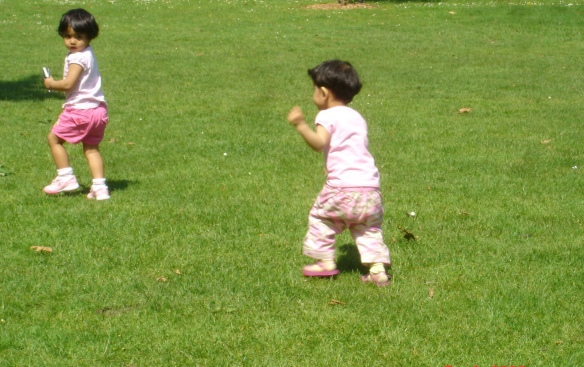 The amount of fun all of us had, was amazing.. What absolutely took the cake, that my friend’s elder daughter and Poohi got along very, very well too – from the moment they met! They even had a sleep over at our place and my daughter could not stop talking about ‘chechi'(elder sister) for ages after that..

What brought on, all this reminiscing? Well, it’s been a year since I saw her last. They returned to India last year, this time, and to be honest, it broke my heart.. Everything felt so empty.. Daughter used to look for her friend, in vain, every time, she went to the play groups, to the library or the parks…We are still in touch and we can still talk away for ages on gtalk or on the phone.. and it is almost as if she has never been away.. But it is amazing how much we still miss each other..  Just makes me wish, how wonderful it would have been, if our friends did not have to move away, or if we could all live nearby.. how wonderful that would have been..

Weekend Update : I have to say that this weekend, while Poohi had a wonderful, wonderful time, I got the bestest compliment from a little 7 yr old girl:) She told me that my daughter and I look like a ‘pair of twins’ :), if only I had been a little shorter 🙂 For an almost 33 yr old to be told that she looks ‘just like’ a 3 yr old is huge 🙂 Coming from the mouth of a babe – I am going to consider it totally true 🙂 And to make it even better- I even drove the Audi !!!! Yay!!!! Even the fact that it was just around our estate did not detract from my excitement!!! Like, my daughter says, ‘I’m so excited and happy’!!!!

65 thoughts on “Of daughters and mothers and friends..”